Hiratsuka, Japan – With the day’s opening 2pm kickoffs out of the way, I ventured to the Shonan BMW stadium in Hiratsuka in search of the opening day revelry. As the sun set, I made my journey toward Isehara station, about an hour West of Shinjuku on the Odakyu line, for Shonan Bellmare’s J1 game against perennial title favorites Urawa Reds.

New entrants Bellmare had comfortably topped J2, the league’s 2nd tier, entertaining everyone with a brand of speedy, all-out attacking football last season, but they knew that the top tier required an overall balance in their play. Pre-sale tickets for the match ran out within two days, a rarity for opening day, but this was definitely compounded by hope for the home team, the stadium’s relatively low 18,500 capacity, and fanatical away supporters more accustomed to the comforts of a 63,700-seater home in Saitama.

Urawa, together with J-league flagbearers Gamba Osaka and Kashima Antlers in the Asia Champions League, had already suffered consecutive losses in a stuttering start to the new season. In particular, they had been on the wrong end of a combined total of 6 losses, an overall zero return, a fact that did not escape J-league Chairman Mitsuru Murai’s attention. The stage was set to begin anew on the opening day to recover some loss pride, light up the domestic scene and showcase the talent available in the league. 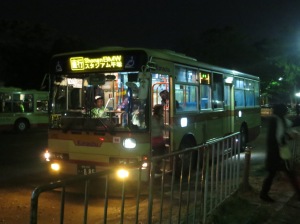 Outside Isehara station, there was calm punctuated by the occasional shuffle. Nothing seemed to be happening anytime soon, save a signboard that told people heading to the stadium to form a separate queue from those for regular services. Two shuttle bus services were running, one at each hour before kickoff. Making the second one with about 30 minutes to spare, a handful of about 10 people waited silently in line. The sky was turning dark as the single ground staff hollered instructions through a toned down loudspeaker. A bus sitting quietly in the corner waited its turn with a signboard showing “Shonan BMW Stadium Hiratsuka”. As I stood in line, a few others followed to extend the line by 3. The bus eventually came round with no one else joining us. I was wondering about the first shuttle service when it dawned upon me that the larger part of the crowd would probably have used the JR Hiratsuka station, which was 25-min away from the stadium on foot.

In contrast, this was a 25-minute long drive through what seemed like the deep countryside. Reaching our destination, fans streamed toward the stadium. They led me through a park and past the dark daytime establishments. Match day stalls lined the other side of the street facing a row of fluttering Bellmare flags. Ecstatic girls took photos with flags of players that tickled and teased in the mild breeze. Fans rushed ahead while talking on their mobile phones. Speakers blasted dance party music but it quickly dissipated into the vast silence. 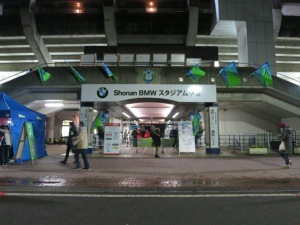 Just past the row of stalls was the stadium arc. I took a quick stroll round it to assess the view. An open bowl with openings at the corners, the perimeter fences allowed ticketless fans like myself to peer inside to catch the game. The Urawa end was particularly open with the goal in plain view. The atmosphere in the cauldron leaked out, but even the incessant chanting by the 18,000 strong crowd did not reverberate beyond the stalls nearby. Sound proofing wasn’t needed. Situated in the middle of a park about 2.5 km inland, sound simply had nothing to bounce off of. A private party was underway, and two teams would do battle for a win to kickoff the new campaign.

Away goal in the firing line

Flags waving, the player’s names over the PA were greeted with cheers from both sets of fans. The stage was set, and the ticketless few had taken up posts along the stadium’s perimeters. It was a queer sight, faces peering in that were lit up by the floodlights that shone onto the pitch. They could have easily been mistaken as searchlights, for the surrounding woods were almost pitch black, and it left me feeling twice detached as a neutral watching from the outside.

As the game kicked off, I made my way back to the station on the regular service, grabbing a bite from one of the stalls on my way out. As expected, the return trip took longer than the direct shuttle service, and I was the lone passenger for a large part of the journey. The whole experience left me feeling excited, but also wondering how lower division J2 and J3 teams managed to maintain afloat and still remain competitive. That would call for some deeper research into the league’s finances, but the support in the stands is very much alive and well. On the pitch, with 22 strikes in the 7 lunchtime kickoffs and no bore draws, its goals galore on opening day, and the new 2015 season has truly taken off.

This entry was posted in J-league and tagged bellmare, football, jleague, sport, tokyo. Bookmark the permalink.