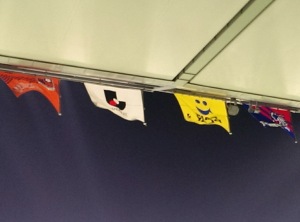 Before this game, Tokyo already played 2 competitive games in the Asian Champions League, putting nine past Thai outfit Chonburi FC without reply at home in a qualifier and losing in Korea at Jeonbuk Hyundai in the first group game. The bread and butter business started today. Or rather should have started with a reassured performance against a dangerous, but nonetheless unfancied side. Pop group rip slyme warmed up the crowd with two psychedelic dance beats.

Tokyo started in tune, fashioning several half-chances with some slick passing involving new boy Takuma Abe. However, as the game went on, Tokyo’s possession became increasingly laboured. In midfield, Kajiyama and Mizunuma struggled with the height and strength of Pecnik and Mrdja, the central defensive partnership of Morishege and Maruyama threatened mix ups from time to time, and Abe’s diagonal runs in attack failed to draw enough timely balls in behind the Omiya backline. Omiya held firm to keep the scores level at half-time.

The second half continued in the same vein. Tokyo probed and passed, looking for openings slowly across a wall that became more solid and organized as the game went on, which eroded the confidence of the home side. In contrast, Omiya were compact, always seemed to win the second ball, and had players who seemed to know where one another were. The tone of play switched, when it did, quickly from unsure and jaded to organized and speedy.

Omiya’s 69th minute goal came against the run of play that began with Wada’s looped pass to Mrdja over newly-introduced Shoya Nakajima. Mrdja shook off and outpaced Maruyama on the wing before putting in a fast cross that found Ienaga who had adjusted his run to create a gaping hole ahead of a Tokyo back line that had retreated too deep. His shot was blocked by Hashimoto but fell to an onrushing Iwakami who gave Akimoto no chance in goal. The space around the penalty spot highlighted the mistakes on display. Morishige had been wrongfooted, Kajiyama was too distant.

Credit to Tokyo for pressing for the equalizer in the next 15 minutes or so even though faces were visibly sullen and shoulders had drooped. Nakajima was instrumental during this period, spraying passes behind the Omiya backline.

As the clock ran down, Tokyo even managed to hit the bar. But they were visibly anxious to keep the ball and find that elusive pass. Home fans fumed at indecision to play the ball forward until the spaces on the field disappeared quickly into the stands, eventually condemning the team to an opening day loss and boos from the home end.

This entry was posted in J-league and tagged fctokyo, football, jleague, sport. Bookmark the permalink.